Everyone has a story. Everyone. Even those society dismisses as just another fill-in-the-blank. They are sons, daughters, brothers, sisters.  They are fathers and mothers. Friends and lovers. They are someone’s joy, and heartbreak. Sometimes they make bad choices, or fall through the cracks. They become just another when we don’t know their stories; this is one of them. 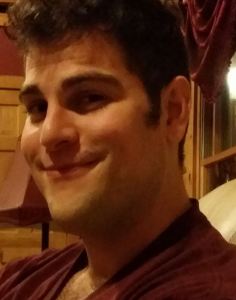 Christofer DeFino was an off-the-charts brilliant, handsome young man. He was always ready to help out a friend, go above and beyond any expectation. He was one of five children, from a good family, a fairly traditional one. Dad worked a job that provided well for his family. Mom stayed home with the kids. Chris became an unofficial Girl Scout when his mother took on his sister’s Daisy troop, and the archery guy at Clatter Valley Day Camp for many years. He went to college, worked as a chemist in the up-and-coming field of medical marijuana—a field he was passionate about—sang karaoke whenever he got the chance, and hit the gym most every day. Everyone remembers his easy smile, his famous hugs, and that he never passed on by someone in need. Chris loved his girlfriend, his family, his friends, sushi, and chicken wings from TK’s. He had three goals in life, make a difference, get married, have kids.

And then there was the Chris few ever saw.

A freak accident at fifteen left him with a crippled leg, chronic pain, and PTSD. No, it is not just for veterans. In his head, a constant chaos of thoughts and feelings he couldn’t turn off. The cycle of surgeries, pain, anxiety and depression led to using painkillers, and when they became too expensive, heroin. He battled heroin for three years, and won with the help of a good doctor, a few good friends, the love of his family, and some heavy-duty anti-anxiety medication. He stayed clean for three years, got the anxiety under control, and felt like he was finally going to be ok. We all did.

In April, he got the job of his dreams, moved out of his childhood home, and was happier than he’d ever been in his life.  Come June 22, he was gone. Accidental overdose. It was three weeks from the time he realized the depression wasn’t going away to the day he died. Three weeks. It happened that fast.

When someone has cancer, no one says it’s their fault, that if they’d only been stronger, it wouldn’t have happened. If that same cancer patient goes into remission, then the illness returns three years later, no one passes them off as being weak or flawed or otherwise dismissible as “just another cancer patient.” And yet society does this to those suffering from these mental illnesses even doctors admit to being flummoxed by.

There is no saying why some people with cancer get treatment and beat it, while others with the same cancer, getting the same treatment, don’t. Sometimes, a person suffering depression or any other label-of-the-masses mental illness gets treatment, gets well, and manages to live a productive life. Sometimes, they don’t. It’s not their fault. They didn’t ask for it. And yet the stigma is undeniable. They’re told to smile, feel better. What does a handsome, intelligent, well-off, twenty-five year old have to be sad about? The choices they make are desperate ones, because not only does no one understand, no one seems to want to.

I write this today as a battle cry, mixed in with motherly love. Drugs, alcohol, reckless behavior of any kind is a symptom of something more, something bigger, and something no one wants to know about. It’s easier to dismiss them as addicts, their actions as irresponsible decisions made of their own free wills. When someone suffers from this kind of mental chaos, turning off becomes the only way to get some relief. No one chooses heroin for fun. No one gets fall-down drunk on a daily basis because it’s what kids do. No one races their car at a hundred miles per hour, weaving in and out of traffic simply because they like the adrenaline rush. Look behind their curtains. See what’s really going on.

We did look behind our son’s curtain. We knew what was going on. And we thought we were addressing it as we had in the past. Chris didn’t make it. Why? We’ll never have real answers, but one thing is certain—the mental health issue is still horribly misunderstood, misrepresented, and sadly maligned.

No one could have fought harder than Chris. His courage and strength in the face of all his pain faltered, and in that faltering, he made a terrible decision. One that cost him, and those who love him, his life. We can eradicate heroin from society, jail every dealer who ever dealt, but until we learn more about anxiety and depression, especially in our young people so obviously at risk, we’re going to keep losing them to their own brand of helping themselves.

Because the dark pit they’re desperately trying not to fall into is that terrifying.

61 responses to “Misunderstood, misrepresented, and maligned”