Grace visited over Christmas, and she brought her little one-eyed kitty, Pippin, with her. They were here for almost a week. When it was time for her to go back to Brooklyn, we were all sad to see them go, especially Toulouse, our five-year-old tabby.

He and Gyro play, but Gyro is a stately gentleman now, and isn’t much given to frolicking. Toulouse and Pippin played and played. When we got home from taking Grace and her kitty back to Brooklyn, our boy looked for his pal. And looked for him. It was really sad.

Frank and I started looking for a playmate for him, preferably around his age. We really didn’t want a kitten. Kittens always get adopted. Better to give an adult cat a home. So we looked. And looked. And worried about our ancient Roxie with any cat that came in as a stray, or from a hoarding situation. She is sixteen, and hasn’t had shots in a really long time. Not only is she impossible to catch, but–being as old and skinny as she is–she can’t really have shots safely anymore. As our cats are all indoor beasties, she’s fine.

We found a cat that had been in a home, and her owner died. Good compromise. We went to see her. She was not a good fit. She wouldn’t have been a pal for Toulouse, and that was our biggest reason for wanting another cat. (Though my kids will tell you it’s just my excuse…and they could be a little bit right, but not entirely.)

While we were at the AWS shelter in New Milford, we saw so many good kitties. So many. None of them, though, seemed like the right fit. I did want a cat, but only the RIGHT cat. Our balance is a good one, and I didn’t want to tip it.

And then we saw this little girl… 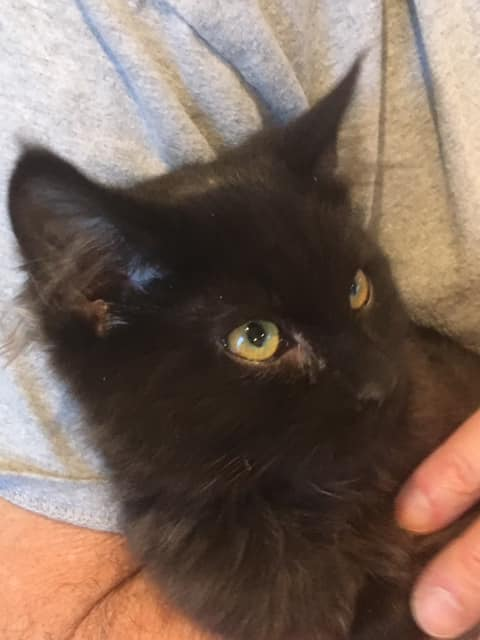 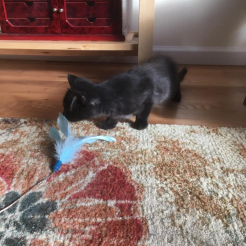 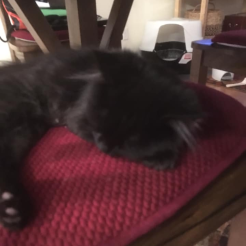 It’s not just that Coraline (yes, named for the Neil Gaiman character–she was born Halloween, so we needed something appropriate) is adorable, she just FIT. Sweet disposition, passed all her vet exams, had all her shots, not old enough to have picked up something that would harm ancient Roxie. AND–this was the clincher–the people who were supposed to take her had JUST THAT MOMENT decided not to. Black cats really do have a hard time getting adopted, and isn’t that just the silliest thing you’ve ever heard?

But a KITTEN??? I haven’t had a kitten this young in about thirty years. I’ve had four month old kittens, but not ten week old kittens. Not since beloved Sassafras, kitty of wonder, have I had one this small.

And that’s exactly why. Considering my Roxie is 16, Gyro is 9 and Toulouse is 5, and considering Frank and I are 68 and 54 respectively, this is in all likelihood our last shot at having a kitten. We’re committing to ten (if we’re not so lucky) to twenty years. If not now, when?

It’s only been a little more than 24 hours, but already she’s part of the pride. Toulouse LOVES her. They play and play, but he’s so gentle. Gyro is a bit of a grumpy grandpa, but he went nose to nose with her (and she licked his nose!) and he didn’t even hiss. He lets her know what he’ll tolerate and what he won’t, while Toulouse lets her do whatever the hell she wants. It’s adorable. Big daddy. He’s so sweet.

As for Roxie, well, of course, we’ve not seen a little grey whisker of her, but that’s not really news. We rarely do. I don’t think she’s happy about the kitten, but she’s generally not happy about much. Darling girl. I do love my Roxie-cat. She’ll come around.

So, here we go. A new adventure to go with all the other new adventures the last months have seen. Fingers crossed it’s yet another good one.

7 responses to “Why A Kitten?”